I
n my childhood, Saigon’s district 4 was dangerous, full of crime and violence. At least that’s what everyone tells me, from friends to family; I was too young to know much about it. My family lived on the other side of district 1, in Binh Thanh.

District 4 happens to also be the area undergoing the most major change and gentrification as Saigon booms and expands. New high rises and cranes have appeared on Ben Van Don, the thoroughfare that lines the main canal that distinguishes district 4 from the center of the city. District 4 also happens to be where I’m moving to this month, to finish up my year of living funemployed.

Below are brief talks with two of my new neighbors who’ve lived in D4 a long time and seen it go through all its changes. 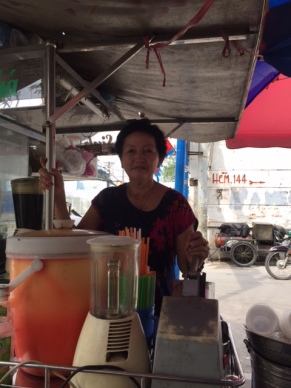 years. The city has changed alot since then! I have a son who drives a taxi for a living and a daughter who does nails. She’s very good, can do all kinds of colors on your nails. My son drives people for a living and makes 350usd a month, he makes a good living for himself.

Price for sugarcane juice: 30 cents per cup
Nuoc Mia, sugarcane juice, is made from crushed sugarcanes, and you can see it made in front of you as the canes are pushed through a set of steel rollers, to come out as pulp on the other side. 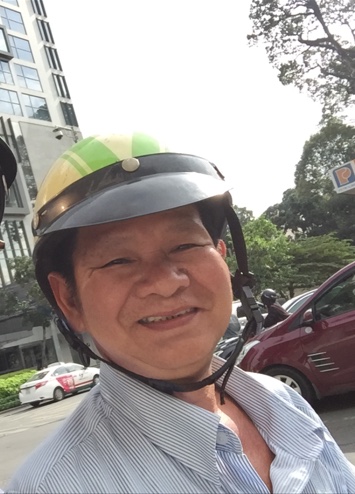 I’ve lived here on Ben Vân Don for twelve years, before that I lived on (another street in district 4) for another ten years. It used to be really dangerous here. Alot of gangsters and criminals. A lot of robberies. It’s safe now and it’s changed a lot, but it’s more expensive too.

We used to live near the wet market on Ong Lanh bridge. It was just a little bridge then. There used to be a market there. Now it’s a big bridge full of traffic.

I rent a flat and live with my wife and daughter. She’s in her second year of college. Two more years! Two more years and she’ll graduate, so I’ll keep driving. She’s going to a university in district 7, studying hospitality and preparing to work in hotels.

I’ve only been with ubermoto for one week. Before that I drove a motorbike for a living as well, but I couldn’t pick up guests as frequently, so I changed.

I also drive a Korean student to school in the mornings and take him home. I’ve driven him every school day for six years now. He’s very cute! He was in third grade when I started driving him, now he’s in the ninth grade and he’s scared to graduate and have to go to the military.

He speaks Vietnamese as well as you and I, yeah, completely fluently! So we talk every morning. Korean and English too, he speaks three languages.

I was hanging around his neighborhood picking up guests, and after I drove them for a while they saw I was reliable and honest, and they asked me to bring him everyday. Now I’ll drive him until he goes to the military for his year away.