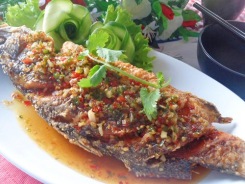 During my first full summer back in Vietnam, I paid 100 USD to a local friend and for the money was able to a) rent a motorbike, b) attain an owners’ certificate, c) possess two rain jackets for biking in the downpours that dropped so frequently during the rainy season, and d) possess one real and one fake helmet, the latter used in case I need to drive a friend around. Within one week, someone took my real helmet and replaced it with a fake one costing one tenth its value. Two weeks later, my original fake helmet too, was stolen, and I was left with the substituted fake helmet that the first thief left me to use during my last few weeks in the city.

For those last two weeks, I motorbiked around HCMC wearing an adorable thin plasticky hat with a ladybug painted on its side, a lovely memento of my experience but one that would convince no one that it was real – real helmets are unwieldy, and heavily padded. The ladybug fake helmet wouldn’t have been able to do much for me in even a slight bump with other riders, let alone anything substantial like a crash with a car, truck, or the pavement. Yet it was understood at the time that many people wore these fake helmets, unregulated, as one can find and buy them more easily than real ones at numerous shops around district 4 where I lived. Indeed, while driving, I looked around and began noticing that the majority of helmets I saw on the roads were fake – you can identify them by their relative thinness or fanciful designs. There were baseball hat helmets built to look like caps from your favorite baseball teams, there were fake Calvin Klein helmets, fake Gucci helmets, fake Hello Kitty, fake Bumble Bee Transformer helmets.  Occasionally I took rides from xe om drivers, who would loan me their real helmets to wear while they wore the fakes as they drove me around the city, a gesture touching in its altruism.

I always felt there was a flexible boundary between the authentic, the “real”, in Vietnam, and the imitative, or straight up knock offs. This flexibility extends to a wider realm than just helmets, ripped DvDs, or diluted liquor one finds in the bars or clubs. In its much gentler form, we can chalk it up to an imitative drive, an ingenuity born out of necessity.  And indeed, Vietnamese imitations of genuine cultural products from the Western world often become more successful creative adaptations to our own surroundings, from the French Vietnamese or Chinese Vietnamese fusion cuisine that can be so excellent (banh mi, Hoi Annese chicken, etc…) to the occasionally less successful (Da Lat wine). We see what we can take, we imitate what we like, and sometimes we improve and make a more compelling Frankenstein monster sum of its constitutive parts.

My cousin and I, and some of our Viet Kieu friends, have had numerous conversations about what is authentically Saigonese, or even who is authentically Saigonese amongst us, judging our identities by the places we have lived in, or the neighborhoods where we’re from, or how long we’ve lived in which section of town. We were all born here and grew up in Saigon, but we have all lived abroad in some capacity. Settling on definitions of the real is hard, however, in a city that is becoming a mixture of different people returning from abroad, expats that settle down, folks from the country and folks whose families have lived here for generations.

But what if part of the essential Saigonese character is a flexibility of identity, this wilful striving to be international, to be more infused with the personalities and cultures of the travelers and expats that increasingly come here to make their home?  Hong Kong as a city is one example of this international identity. For how can one say, for example, that Lan Kwai Fong is not as essentially Hong Kong, as Mong Kok or TST?  Does a city’s identity and culture have to come from its past history, or can it always be in the process of becoming?

I once chatted with a friend from Hong Kong about the tendency of some to equate authenticity in their travels with a kind of roughness, a sweet suffering and martyrdom. Before their visit to Hong Kong, a couple, friends of my friend, was clear with what they’d be willing to see: bring them only to what’s really Hong Kong. No Western restaurants, or places where you can see expats frequently appearing, or expensive drinking establishments (though they can afford it). Well, that excludes a large section of Hong Kong Island that I enjoy, as well as a fair amount of historically interesting buildings and places. I resented too, the notion that non-Asians are simply not “authentically Hong Kongese”, considering the non ethnically Asian families that have lived for generations in the city.

There can indeed be a danger to too much internationalism, however. This insidious and deleterious effect on culture occurs so subtly, that the cities that cater too much to the whimsical desires of tourism often finds itself growing homogeneously “international”.  District 1 today is so vastly different to the place I grew up in so many years ago. A saunter around the neighborhood nowadays yields encounters with “authentic” Brazilian meat skewer restaurants to Japanese sushi bars with imitative Japanese greetings and bows (the new Takashimaya in the newly constructed Saigon Centre made the news recently for training their Vietnamese staff in Japanese hospitality practices), to Middle Eastern cuisines with belly dancing, complete with a chef or two transplanted from their home countries. Such is the current global mish mash of Saigon center. And in response, certain Vietnamese restaurants that want to get in on the market of international travelers who frequent their cities will forget their unique flavor and ingredients in the rush to temper and cater to a neutral international taste.

In Nha Trang, I once sat down with my mother at a restaurant, asked whether or not they served Vietnamese food, and ordered Ca Chien, which in Vietnamese is a wonderful deep fried dish where even the bones are crispy and edible, and heavily flavored with our fish sauce (nuoc mam). After a little wait, the waiters brought out Fish and Chips, to our surprise.

I asked for an English menu and looked carefully at it, and I noticed a hodgepodge of items from around the world, catering to all the international tourists that frequent the city: Russian Borsch was there, as was Pad Thai, Dim Sum, a plethora of sushi choices, Korean bulgogi, Kim Chi noodles, and yes, the restaurant had what were clearly traditional dishes of Vietnam. There were no demarkations of Vietnamese or Asian items from Western items; they all existed in a melange of cultural signs indistinguishable from one another. One can only point a finger and hope for some degree of cuisine authenticity. In such a stewpot of flavors, Fish and Chips, of course, would translate back onto the Vietnamese menu as “Ca Chien”, or literally transcribed… “fried fish”.

2 thoughts on “On Imitation and Authenticity in Vietnam”