The worst flooding in Saigon comes in late October to December. Black clouds roll in from the direction of Vung Tau, pushing up river like a gathering horde; the once airy sky turns heavy and dark, auguring unrelenting rains to come. In minutes the streets are overwhelmed. Motorbikes are caught mid journey. Drivers wait it out under cafe awnings, watching the streets turn to streams, streams to rivers, rivers to oceans of disturbed waves, all in a Saigon minute.

The city’s bordering rivers and canals take on the sheen of oil slicks, with an occasional gleam of a candy wrapper or a bright styrofoam takeaway burger box giving variety to its surface. Bags clog the drains and make the flooding worse. Evenings, the city’s canals are strewn with wash off from houses and shops of the city. The Saigon river becomes a python overfed on discards, its belly fat and distended, flatulent, gushing sluggish grey water onto the concrete banks that barely contain it.

Where I live, near Ben Van Don street, at the turn I make before I get home, a dark pool of canal waters that have flooded their banks after heavy rains always appear. Even on a dry day, if the water level had risen from flooding north of the country, or from king tide, my street gets its mini lake for an entrance. Then, the new high rises bordering these streets become lighthouses and harbors for motorbikes and cars all drifting along.

I make a daily commute of about six kilo-meters from my apartment in district 4 to my school, in district 7. The route takes fifteen minutes with its usual morning and afternoon traffic, but running into flooded streets on the way back adds an extra forty five minutes.

All this water can be fun, though. My first time in such a downpour, I was stuck at work, watching the rain from the fourth floor windows of my classroom, waiting for the black clouds to roll in during my last class of the day. None of the students cared about anything literature related, I stood staring, knowing that I wouldn’t make it home at my usual time. When the downpour came, I couldn’t see past the front gate of the school – the world was an opaque grey canvas of water.

Two hours later, at six, the rain finally let up and I hopped on my bike, on a rush to get home.  At the turn into Nguyen Van Linh, however, the flooding had begun in earnest. The water covered the two lanes set aside for motorbikes, and the sidewalks next to them too, were half covered. District 7 had become a marshland, a novel geography of streams.

I plunged my motorbike in, barrelling along, trailing the splash of other motorbikes, watching for dips they’d make to signal potholes, or concavities in the road. Every block or two, a bike would stall out, and its driver would jump in, knee deep, to the lake that was once a road, and pushed his bike to higher ground, beaten, winded. At deep points in the water, I kicked my legs up and rested my feet on the motorbike’s side pockets just below the handlebars, looking like I was joyriding and showboating for no one but myself, just keeping my pants dry from the splashing water.

Nguyen Huu Tho, which leads directly to district 4, was blessedly high and dry, but the small alleyways and roads that fed it were gorged with flood waters, and as I drove by I saw people wading through, knee deep in water, from their drowned homes.

Once I made it home, the shower was the site of my first visit, where I washed my itchy ankles and administered ablutions for a half an hour to clear the residue of all that sketchy water I motorbiked through.

Nguyen Van Linh is constantly being raised these days. Every other lane of its eight lanes would get a two feet level of cement, set to dry while the traffic works around it on the lower lanes. Once it’s solidified, the other lanes get the same raise. I can’t help wondering, though, if all this raised land is just pushing the flooding onto the sidewalks, parking lots and shops next to the highway, onto other sections and neighbourhoods of the district. At such times, warding off the effects of flooding, climate change and perpetual growth in this city seems a Sisyphean task.

In January the rains clear, the diesel air is cleansed of impurities, and life continues on. 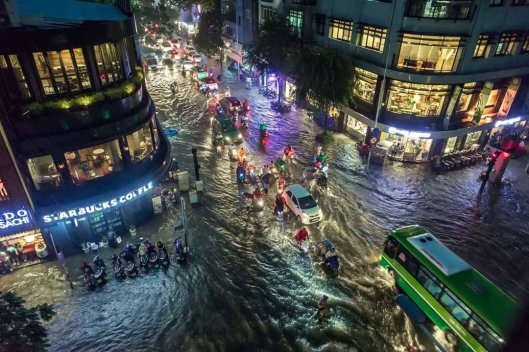