he last time that I voted on site was the election of 2004, and I voted for John Kerry. My state agreed with me, but it wouldn’t be enough. Bush took the overall electoral map, which looked overwhelmingly red after the election finished.

The day after that election, my students looked like they had been put through the ringer: baggy eyes, faces downcast, aggrieved and sullen.  I was teaching at a Quaker school in Delaware at the time, and if there was a man whose policies so completely disagreed with the civic minded, giving, peaceful ethos of that Quaker tradition, Bush was it. There was nothing we could say to one another, and literature offered no palliative. Woolf and Joyce stood silently by that day. A maverick Republican in the class offered his gleeful, gloating commentary, and the rest of us were all too defeated to debate him, or to care.

For the next two elections, I voted by absentee ballot half a world away in Hong Kong. I watched Obama’s acceptance speech projected onto my classroom wall, the room filled with tear streaked cheeks of students, colleagues and friends, all of us sharing a moment that none of us considered possible in our lifetimes: the sight of a capable black man elected into office, taking over from the worst president we had endured.

For the rest of the day, my students congratulated me in the hallways, as if I had achieved something important, as if, by being an American, Obama’s historic achievement was also my own. But it felt like change was occurring in my country without my being there. Watching the crowds onscreen, then skimming through the Boston Globe online for pictures of my neighborhood in celebration afterwards, I felt homesick for America for the first time in a long time. 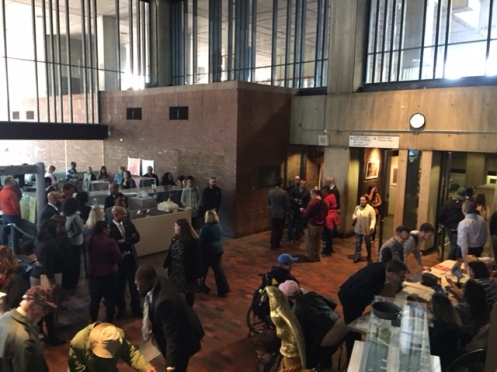 Twelve years later, I am in the cavernous lobby of Boston City Hall, waiting in line to vote early. The line of voters curves up and down the granite stairs, skirting the metal detectors and bag check station, terminating at a long table where five volunteers on laptops check IDs and hand out paper ballots. Camera crews from various local stations are there, a tall, distinguished looking anchorwoman walks through the crowd, interviewing various constituents. It’s a great slice of America’s diversity, at least for now: there are elderly in wheelchairs, hispanic Americans, African Americans, another Asian person in the crowd. A woman with an NECN shirt steps through the crowd, carrying her bunny rabbit in the nook of her arms, and I’m not sure if it’s meant to predict or just act as voting mascot. I realize while waiting, how much I’ve missed America. I decide to chat with a woman ahead of me:

I didn’t think it’d be so busy, what a scene!

Yeah me neither. I think it’s the first time they’re doing it in Massachusetts.

It’s good too, because I’m flying out in two hours. I wouldn’t have been able to vote otherwise.

Oh really? Yeah, I would have missed this vote too. I’m flying out in a week.

I missed out on the previous elections because I was abroad.

This one is too important to miss though. Had to make sure I make this one, haha.

Well, I hate to tell you this, but we probably wouldn’t have tip the scales either way. Mass is pretty much always blue, it was Hillary’s state from the get go.

Yeah but if everyone thought that way and not show up.

Haha, yeah, I hear you. Brexit wasn’t supposed to happen, according to polls. And it did.

I’m also interested in the other items on the ballot. It’s a really interesting time for this election.

She’s referring to how this is the first time that recreational use of marijuana is on the ballot for Massachusetts. I tell her that I don’t think it would pass. As liberal a state as this is, it’s an item that I just don’t see passing the popular vote yet. It would, however, be an ingenuous idea to take if you were a Democratic party planner, to put the item on swing states, and get the youth vote out en masse. Nothing gets the young to come out and vote faster than putting marijuana legalization on the ballot, I say, and the young and millennial usually vote Democrat. 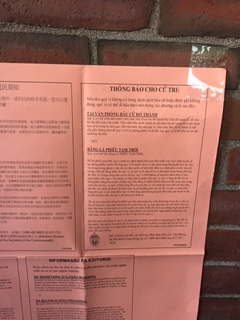 As we talk, a helpful volunteer walks around saying “If anyone is tired, we have chairs you can sit on, you can come right back to your place in line.” Two old folks sporting white hairs get wheeled in, pushed by their kids. A pair of students in front of me cordially move out of the way. Postings on the wall give instructions for voting in Spanish, Chinese, Portugese, even my original language. The vibe is friendly, cheerful, civil.

I don’t know if such moments of civility will be repeated throughout the country on November 8th. After all, Trump promises to combat the decision with acrimonious slander and protest should he lose, and his supporters all seem to think this is rigged and has to “patrol” to make it honest.

For now, though, I take the moment in, note its rarity in the wider world. It was for such moments that my family gambled our lives on the dicey waters of the South China Sea. It was for such scenes that yellow umbrellas were raised and unfurled.