This review has also been published on Bliss Saigon in their culture section.

idway through Nguyen’s The Sympathizer, the protagonist of the novel, a Vietnamese spy for the north on assignment to follow a Southern Vietnamese general who is exiled to America after the war ended, is tasked with hiring extras to play Northern Viet Cong “baddies” in an American made Vietnam War film.

The narrator gets his extras from, of course, southern Vietnamese refugees who had escaped after the war. It is an intriguing, absurd, troubled setup, and it is in this melange of confusion and convolutions of ironic reversals that Nguyen creates his unsettling take on the war and its aftermath. The Sympathizer is an accomplished, clever, and finally, deeply melancholic piece of work on the Vietnamese diaspora scattered by war. It is also, oddly enough, very funny. 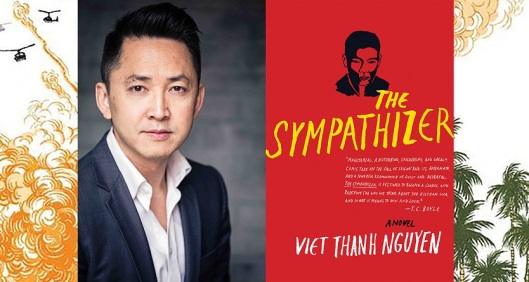 Nguyen depicts Hollywood’s recreation of the war as an absurd act of fantasy making, and he is as assured at this satirical writing as he is at capturing the all consuming chaos of the last days of Saigon. Indeed, it is Nguyen’s nimble veering from satire and absurdity to a sudden snap of pathos, with barely a moment’s respite for readers to process the shift, that makes The Sympathizer a unique and original work.

The book is certainly ambitious. It tackles such subjects as Hollywood’s representation of the Vietnam War, pop culture, the uprooted, nationless Vietnamese diaspora, divided loyalty, and even the unveiled racism faced by a half Vietnamese, half French narrator on the margin. The times were such a frothy mixture of all these elements, that the book’s narrative remains focused and interesting even with such a sprawling scope is a credit to Nguyen’s ability to control the narrative.

Occasionally, Nguyen’s narrative voice over-relies on the ruminating, critical mind of the novel’s hyper articulate narrator. Nguyen is a professor, and his narrator reflects the academic’s tendency to convey situations with the verbosity and jargon of academia, when judicious silence would have better served. Certain moments in the novel simply don’t need critical commentary.

When a white American director of a film on the war (a loose imitation of Coppola) gives a deeply troubling speech to his cast of real Vietnamese refugee extras on the set his film to “inspire” them to be more authentic, readers can see that the setup is a satirical gold mine: “Long after this war is forgotten, when its existence is a paragraph in a schoolbook students won’t even bother to read, and everyone who survived it is dead, their bodies dust…this work of art will still shine so brightly it will not just be about the war but it will be the war.” (172) Given the horror of such a claim, so bluntly hubristic and American, Nguyen need not do more than let the director, Trumplike in ego, emote in his own language. Yet he spends a lengthy accompanying paragraph explaining and layering it with the narrator’s reflection. “And there you have the absurdity…”, he begins, and we readers lose the thread of darkness introduced. The critic takes over, when the language and situation was more than enough.

Such a flaw does not overshadow the book’s beautiful flights of rich, evocative prose. The most gorgeous and breathtaking passages occur when Nguyen simply lets his speakers speak, unshackled by critical commentary; in such moments, his prose rips into a darker undercurrent of America’s troublesome relationship with the war and Vietnam’s complex relationship with its past, and it soars. The language captures the tug and pull of nationhood, the fragmentation of various identities, and shows us how lives can be torn violently apart by traumatic events years after their conclusion.

We hear from Nguyen’s pen too, the loneliness of the uprooted and exiled. He so aptly captures the melancholia and nostalgia of a diaspora now scattered across the world. How timely for Nguyen to publish this work and end it with a reflection upon the refugee’s existence: a shade of a human being, nationless, tossing himself into the ether with only a singular goal to survive and go on. The Sympathizer is a dark, nihilistic vision, but one that is peppered with humor, with absurd situations and revelations, all written in a distinct voice. Flawed it may be, but it is also a powerful and original work and an astounding first novel.