The floor is made from the carcasses of spruce trees or pines. Their dark amber, luxuriant smoothness, and all the veins in the grain together seem tailor made for this room, as if nature had contorted itself into flooring to form the ideal of a high rise’s interior. Entering the space from corporate headquarters, you’re struck by the warmth from decor and wood, the shades of light on amber giving the place depth and a curated, lived in feel. That spruce grew tall and strong so that it might be trimmed into symmetrical planes, smoothed, fitted into each other and take the weight of a thousand steps of wealthy cosmopolites traversing its surfaces, talking property.

Glass tabletops adorn the dining and living room space; the study sits there to the right, small chair, desk and a settee.

Ahead of you, a man raises his voice; he’s complaining about the tile quality of the bathroom to his guide. You notice with alarm, that he could possibly be American, but you listen closely and recognize that his accent suggests a European background. His tone tells everyone within the vicinity how important he is, how able he would be to purchase not just one, but possibly several of these apartments, perhaps even the penthouse. The placating voice of the realtor responds, quick to apology.

In the bedroom, beside the perfectly made bed, sheets slightly ruffled to feel more lived in, you notice Camus and Flaubert on a small reading stand. Books! The classics! You reach out to touch them, but find that, like the books in Gatsby’s library, their pages are uncut. The pages are uncut because there aren’t any, because the books are three dimensional card board representations of books.

Why the French classics? You ponder. To appeal to potential European buyers? To those who are not European ethnically, but with aspirations to be like European owners?  Is it a wink and nod to the nostalgic Viet Kieus like your parents, who might hope to return and retire in the land of their youth?

The floor to ceiling windows look out onto a screen facade of a night scene of Saigon, bustling lights, the city alive and alert, electrically charged, but frozen in a pose of frenetic activity.

You leave one site and ride to another.  The van takes you below an extended tunnel beneath the Saigon river, which wasn’t there when your first returned just ten years ago. You ascend towards harsh sunlight; the road expands and you realize that you’ve left the noises and bustle of district 1. Construction cranes loom on both sides. The shells of half finished villas dot the landscape, a swimming pool under construction, signs advertising what they might look like upon completion, happy smiling families jumping into pools. You drive on.

The friendly, fetching realtor takes you here, to the future of the new city, a showroom of the company’s major projects, situated across the road from its current, ambitious construction, far away from the noise of district 1.

Three dimensional models of high rises stand straight in lit up platforms, dotted with little plastic figures, surrounded by moats of plasticine turfy grass. You note that these are mostly nighttime depictions of soon to be constructed flats. Each capture that early hour in the evening when lights are just coming on, and a hazy soft glow is cast on the walls of these play buildings, on the gentle figures of the family lazying about the painted on pool, or the mini single man returning home with his groceries.

A big screen gives various options for apartments. You can choose any flat you like, and it creates a rendition of that room, complete with furniture, details down to the windows’ views, or the lighting at different times of day, or the view you would have of the city from this apartment, at that particular time of the day.

You notice with bemusement that there are no motorbikes in these model visions of the future of Saigon in high rises. You don’t see them in the computer models, or in the actual models of the flats… just a few plastic cars, some trees, a few leisurely pedestrians mid stride, crossing empty roads, inert upon the placid landscape. 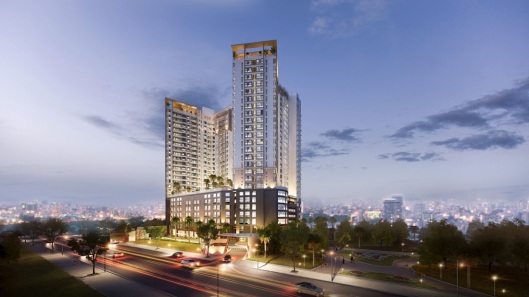