Recently, I had the good fortune to be shown the virtual reality playroom in the Google offices in New York where my brother works. My brother and I spent about an hour and a half trying out some incredible virtual reality hardware, testing out zombie shoot em ups, plane landing games, fruit ninja games (the controller becomes a three dimensional sword in your hands and the fruit sprays bucketloads of colorful juice onto your eyes!) and most wonderfully, a 3-D painting game that was a much cooler, more permanent version of light painting. Your controller emits colored light that gets suspended in the ether, apparition like, that your corporeal but invisible self, pushes through and looks at from various angles. 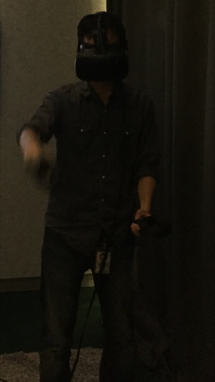 “The brave new world of the Star Trek holodeck is upon us!”, the excitable technophile amongst us would, at this point, exclaim. Not so fast, says Tim Cook. It’s less interesting than what’s already here, the digital additions to reality that are being offered en masse in such forms as Pokemon Go, snapchat filters, and so on. This state is closer to, as Mr. Cook calls it, “augmented reality”. According to a Vanity Fair summary on this battle between purely virtual vs. augmented reality, the CEO has “nailed the problem with virtual reality”. The main problem to him: virtual reality is inherently antisocial, while augmented reality has elements of engagement with others, with the real world.

But the issue is a bit more complex than the Vanity Fair article and Tim Cook’s ABC interview suggest. For one thing, what is defined as “augmented reality” has significant issues once applied to the real world. Unlike the relative safety of a fully virtual world, the blurred augmented world is unpredictable. Sometimes when the digitized, virtual world encroaches upon the analogical, real one, the analogical one fights back.

In Ho Chi Minh city, where I live, Pokemon Go is very popular. So popular, that there have already been numerous cases of stolen smart phones (thieves have a field day with Pokemon chasers sticking expensive iphones out, doing whatever they can to catch those creatures), “go” induced traffic accidents (chasing Pikachu while on a motorbike is hazardous not just to you, but the thousands of other drivers you’re crashing into), and an increase in traffic jams.  Taxi drivers have mentioned to me certain areas they avoid at certain times of the day, knowing that pokemon chasers go there to catch pokemon go spawn. I recently had a thirty minutes long conversation with one Uber driver who spent the entire ride complaining to me about adult pokemon chasers in Saigon: “Who has time to play this stupid game? I barely have time to sleep. I’m an adult already. I have to drive and make a living. These people all go to these spots and they slow down my route. As if traffic wasn’t already bad enough…” and so on.

In comparison, a purely virtual world offers a safe, placid testing ground and a way to test immediate aspects of the real world. As Tim Cook mentioned, educational uses abound for such technology. No more grave digging for Dr. Frankenstein; he can test out his ideas on virtual deceased bodies! No more long flights to St. Petersburg, young art afficionado, just put on these goggles and do a low carbon footprint tour of the Hermitage!  It might be isolated and removed from the messiness of the real world, but its users won’t be getting their wallet snatched anytime soon.

And even if virtual reality is escapism, it can be fantastically beautiful escapism.  What is art but sometimes a visceral reaction to life’s sorrows, a pull of the imagination towards  that grotto of the mind so that bright beautiful things may come, may materialize in the realm of others’ reality?  As a first time virtual reality user, playing with the 3D paintbrush was a surreal, crazy kick. That sensation that the world, the very air I touch, could be transformed, manipulated, and colored to my will, was incredibly freeing. One could only imagine what the masters could have done with 3-D painting.

I must here admit a bias against augmented reality. Snapchat filters freak me out. I don’t get Pokemon Go. Give me a full virtual room, or give me the real world; don’t give me Pikachus popping up in my cereal or sexy girls with elongated, licking cat tongues and buggy eyes populating my social media. Our media saturated, youth and beauty obsessed world is already augmented enough, we don’t need yet another filter layered over this disappearing natural world. You might say that virtual reality, then, is the ultimate layer, the already too late augmentation. I would argue that knowing of its artificiality is one way to keep our wits about us. Entering the virtual, creating an artificial digital world, is one way to auger disasters and respond to the real world and its complications.  It is like reading science fiction and applying its lessons and fears to the real world. It was, in fact, oftentimes the use of the holodeck in Star Trek – a place where captain Pickard would enter to work out complications in the real (but fictional to us) world he was living in.

So it’s my hope that this “augmented reality”, a melding of virtual and real, will quickly go the route of the one hit wonder, like the brief blockbuster “Who Framed Roger Rabbit”, made years ago. That film, which connected live actors with an indescribably curvy, buxom rabbit and celebrity toons, was ahead of its time, but it didn’t usher in a period of awkward life/virtual integration in Hollywood. Rather, WFRR was a precursor for future movies that had seamless, fully immersive presentation of the real, using the convincing special effects created by our computers (think Jurassic Park, and later, Avatar, etc…)

Imagine this: you are chatting with your brother, but other than hearing his voice, he is not there. You converse with his avatar, a talking, moving, snooty poodle.  You walk and talk with him through the evening streets of a virtual Paris, because it’s beautiful at this time of year and day, and because you’ve always dreamed of owning and walking a poodle in Paris. All the while, you’ve never left a room in your home.

Isn’t that so much more adorable, and safe, than watching dog ears and a snout sprouting, like cancerous outgrowths, onto your sibling’s all too human face, or tossing some ball to some virtual creature superimposed on the street, while a motorbike riding thief is lurking and watching nearby?